The Hunt is Over! The Horn of Valere is found!

Now comes the long part, I'm getting an inspection done tomorrow, and I'm not anticipating any problems. I'm talking to a couple of lenders for the loan, and we'll see how that works out. The closing date is 6/20, which gives me until the 31st to actually move in!

Exciting stuff. Soon I will have to post about the various house gadgets I'm looking into. As with all things, the house must be gadgeted up! Also there will be furniture and art purchasing to be done as well, though all in its own time.

Oh, and I thought I'd give some explanation for the split level over the weird house, the weird house was 50k more, and very inconvenient to the highways, also, only had a 1 car garage. That really killed it, since I'd have to put my expensive car or my expensive bike on the street in a very urban area... So, split-level glory is mine!

So, Mike and I went out today for quite a bit longer than I was expecting. Anyway, I think we've found two good candidates. Which is good because the last 2 I posted about are already gone :).

The first house we're calling the Weird House, MLS 28032152. This is a really interesting house because of the whole 2nd living space in the basement. The spaces is hard to use, but has a lot of charm and character. Biggest benefit is that its only about 10 mins from South Lake Union, so its the closest house to work that I've looked at so far:

The second house is a Split-level house MLS 28053247. THis ia a very large house with a lot of bigger rooms. It has an enormouse garage (4 car) and a great yard. Its pretty far away, though, ending up all the way in Shoreline. Video below (less edited than other videos, but you'll have to live)

So, I went to 9 different houses yesterday evening. Mike and I were a little tired out by the end, but we found 2 winner houses, I think.

The first is MLS#28082816... It Redfin isn't pulling it up right now, but you can try looking it up if you want. This house is nice, with a great yard and a hottub. Video below

The Second is the so-called "View House" which has an incredible view out over east capitol hill and out to the cascades. This one is in the U-District very near university villiage. This one has a spa tub, very nice, but is sorta small, great location though. Video below

So, I've finally started the process... Its exciting but also crazy!

My agent is Tammy Hatch, and I'm going to look at some houses tonight. I've already got some pre-qualifications on loans, and I'm working with some loan ppl. Things move fairly fast, it seems. I started on sunday, so very fast. (So many people are working on sunday, its crazy!)

I also bought a video camera to help with the process see it here. This is because everything in life is enhanced with gadgetry. Everything.

"The Will of The Sky People" and "My Soul to Keep"

I thought I'd talk about 2 recent games that I ran. Both of these went pretty well, though suffered from the same stunt platform problems that we've already discussed in this blog. (Both of these were run before the discussion)

The Will of the Sky People

As I told my players, this game arose from the idea that "Dirigible are really cool". This was mainly brought on by the super awesome web comic Girl Genius which has many awesome blimps and even castles on blimps. So cool. Anyway, I wanted some reason for everyone to be up in blimps. After all, there are really good reasons for people to build things on the ground: its much easier, and results in 100% less parachute-related commuting accidents. After thinking for a little while, I came up with the idea that there had been some sort of World War and the final stages of that war rendered the earth inhabitable. But then, how are people living? How can they create new blimps? What are they eating? Where do raw materials come from? Since I have Keith as a player, I knew I would need some kind of answer for these questions. And what is the best way for GMs to fiat away annoying questions like that? Magic! So, I invented some will mages with magic based on the will of the caster. The defiling of the earth then was easily explained away as the greatest of will mages casting a spell to destroy his enemies and having it backfire on him.

To start off, we had a quest given to us by the king of the sky nation (I forget its name) to go to the ground and use the will-enhancing machine that has caused the contagion to be released on the ground to reverse the badness. This was my first mistake. We had this awesome world of lashed together blimp society with sky divers retrieving material from the seas and will mages and cramped living quarters and not being able to see the sky because of the blimps balloons over head, and what did I do? I sent them to the earth. Also I gave the plot to an NPC (I had actually wanted a PC to play the will mage that could get them to the surface, but no one took me up on the offer). This was terrible. The game was good, but it would've been much better if I had had the players find some map to the machine that was up in the sky somewhere.

Anyway, after the players found the machine with much daring do and hooked the NPC up to it to remove the contagion, it was revealed that of course the will of everyone up in the sky was keeping the contagion around (they all believed in it so...). Well, what is a newly superpowered NPC to do? Start killing people until not enough believe, obviously. Some stunts later and the game was concluded.

I think everyone had a good time with this game, and the blimp setting was awesome, but there were some mistakes.

My Soul To Keep

This game was based off the super awesome xkcd comic, Nightmares. See it here: 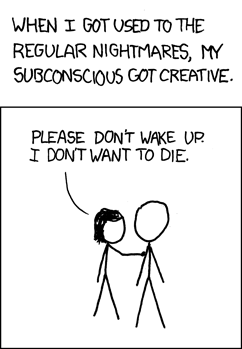 XKCD is extremely awesome, and this is one of the best strips in it. Especially that alt text. I mean, wow! Your dreams pleading with you for your very lives, asking that you never leave them, that you live with your dreams forever! Oh man.

For this game, I had the players create really really twisted characters. In particular I asked for characters that had one great dream but had no possibility of achieving it. The kind of thing that you want so badly that when you wake up you cry because it can never happen in real life. And they had to dream about it most nights. I also asked them to come up with how their characters are coping with the dreams. Do they try to spend all day asleep, spending every moment possible with the dream? Do they take speed or some other stimulant to prevent them from ever sleeping so they never have to feel the loss of the dream again?

From that starting point we got several characters. One guy who wanted to open a french restaurant but really wasn't good a cooking. One jazz musician who lost the ability to play music and his wife and child in the same night, a paraplegic who had fallen in love with a jock, and a man who had his girlfriend/fiancee killed in a car accident after arguing with her.

I started with having their dream people beg them not to kill them everynight. From there we learned that it might be possible to make the dream world into the real world. With some shared imagery of a clock towner that signaled the end of dreams, they set off to topple the tower. Instead they encountered the old dreamers, the ones that had made the current world from the previous dream world. They fought both in the dream world and in the real world (in the real world the old dreams had positions of power, which makes sense because they made the world)...

Eventually we concluded with some stunts of putting as much energy and joy into their dreams as possible.

This game went really well. I think we had some great characters with some very tragic plot lines. And even better was the feeling of hope and accomplishment we got. We started with characters in terrible positions and rebuilt them, and I think that was pretty good for our happiness levels.

They didn't bite on the more philosophical questions (if we're recreating the world what about people who end up in situations like ours), but it wasn't really necessary to get into that stuff.
Posted by Ben at 5/14/2008 05:18:00 PM 1 comment:

The Art of Being a Nerd

I was just reading Tim's blog, when I came to this great article, which describes, in painstaking detail, the thought processes of a nerd. As a confessed member of that group, I had an intense desire to read it, and it was great. Its a little too late for me to get really excited about this topic, but I thought I would pass it along to others encase they missed it.

In roleplaying news, we've been trying some more character-focused roleplaying with immersion rather than stunt platform style games. I think its been working out fairly well, at least for me. I got to play a completely evil character last game, which is always fun. I think I've been hitting the evil a little hard recently, though, so I'm planning on a happiness and light character for the next time I get to play.

A brief glimpse into our last two games: 1. Steve ran a game of human diaspora with the earth being destroyed and us eventually discovering alien life. 2. Keith ran a game of Amber where we started with founding our own new Amber (I was this universe's Oberon)... That character was well an truely evil and sadistic (I really tried to give it that Oberon feel), which worked in some respects but I think in others it was a little too much, which is why I'm planning on going the other way in the future.

We've also gotten up to session 2 of my new Saturday game Devils of Royalty and Divinity, which I think is going well (though you would have to ask my players, really). Last session saw the creation of a new god of logrus and pattern and the promise of much havoc to come.
Posted by Ben at 5/13/2008 02:21:00 AM No comments: