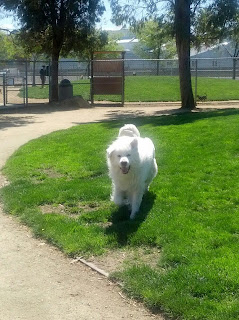 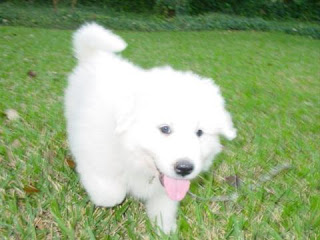 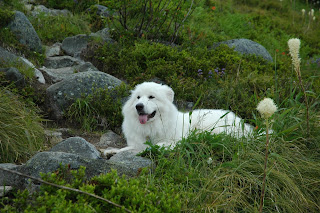 Oh Ben, I am so sorry for your loss. I didn't know Belle well, but what was so wonderful about Belle was even if you didn't know her she would greet you wholeheartedly. It was so obvious you were totally and completely her person. Thank you for sharing about her.

Going to bed last night and waking up this morning, I came to the part of the bed where I expected to have to watch my feet because there would be a huge fully dog and I didn't want to step on. She leaves a fluffy white hole in our lives.

She was such a game creature. You want to walk another mile of California trail back to the car? Well, she's kinda creaky, but that still sounds good!

A fascination to little kids, and the way she honed your little-kid-telepathy skills. The same questions on every walk, cheerfully answered.

She was so expressive. The "hoof" noises of "really? You're not sharing dinner?" Eyebrow waggling. And she was such a cheerful critter.

Those puppy years were crazy in that little apartment. Trying to convince Belle to not jump on you was totally a lost cause...it was more a battle to prevent your face from being regularly licked. And of course going on walks where the absolute last thing on Belle's mind was doing her business. "Ok human I'm finally read...oh wait is that a weed up the road!?! That's so cool! Better check it out."

Things were much chiller in the later years were Belle had a yard. Still wanted more petting that I was ever in situation to provide though.

I'm sorry Ben. Belle was a beautiful (and overpowering) dog.

Belle was such a beautiful large dog. I think the first picture I saw of her was on the internal Amazon wiki page for how to use s3proxy. I wonder if she's still on that page :)

Fortunately, I've had the day off to think this over.

Belle was a pretty epic dog. I remember meeting her for the first time at your house and thinking, "dang, she owns this place." She was quite a force to reckon with. My favorite pic of her is Rick and her looking into each other's eyes. Check it out on Facebook, it's in his pictures.

After the memories, my mind ends up being a jumble of thoughts and emotions. The day of was one heck of a day. A lot of tears, and apologizing, and being thankful of the company and friends surrounding to love and remember and support.

I can't help but think back to BenCon. Showing you that I still carried the cards in my wallet. Admitting, thinking about the events surrounding it often. Oh, Mara. The things I hold and cherish from it. The same aspects that all humans share:

We will experience death.
We feel alone.

Even in the face of those facts, each one of us has an incredible, powerful and fantastic strength to overcome and continue. Through death, we are all connected, it's a universal understanding. It's something I remind myself about once in a while, when I see a stranger, or some jerk in a store, or a loved one, or when I'm surrounded by my closest friends.

The great thing is, Belle does not simply end. That energy and life carries on in thought, and in love. It will change and transform through time, and it will change hearts and minds through you and those around you.

With that all said: I'm so very sorry for your loss. You're in my thoughts. And we are not all alone. Love you, my friend.

I had never seen a Pyrenees before Belle, and my first thought was "Holy moly, Polar Bear-Dogs are real"! I often worry about how I will feel if something were to happen to my cat, and it must be a hundred times worse when it happens. I hope you will take enough time to grieve. You and Belle are in our thoughts. She was such an amazing dog - so happy and loving. Even when she was in pain she would light up with an enormous dog smile when she looked at you. I've really been struck by how connected the two of you were. Even in a crowded room, you both always seemed aware of what the other was doing and feeling. Mike and I are very sorry for your loss.

I remeber sitting on the love sac in your living room in Seattle with Belle. She was so cuddly. She shed A LOT and was a great dog. She will be missed.